How would you spend all day in a space about six feet across from back rest to back rest, and approximately ten foot long with no headroom to stand upright?

By ‘all day’ I mean I opened the hatch around 0600, felt the rain I was already hearing on the deck, listened to the wind in the rigging, decided we weren’t going anywhere, pulled the hatch shut, the canvas cover over the companionway and settled down to wait until the rain stopped and the wind dropped a knot or two. Neither occurred.

I eventually gave up and went ashore at 1700. The wind was dying but it was still drizzling. These are the images I took then . . . 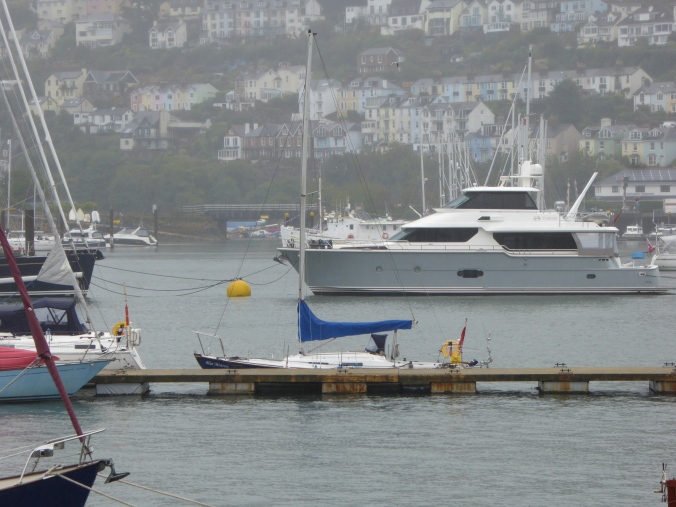 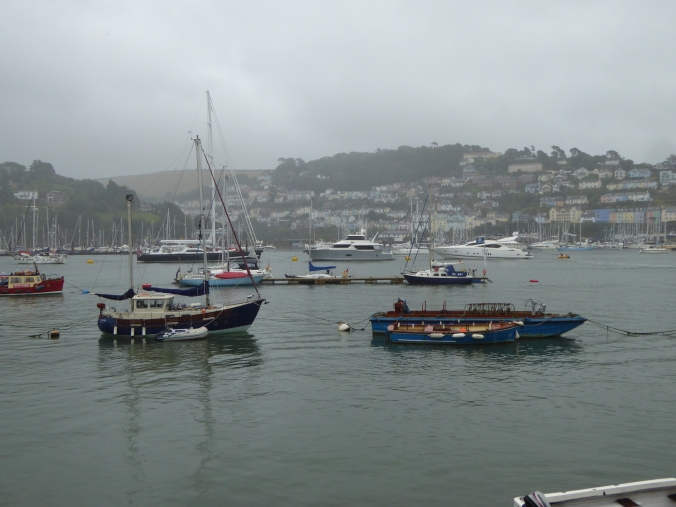 So, a bleak day in Dartmouth . . . but not an unproductive one.

Apart from the wash of the ferries, the tourist boats and various yachts that were putting to sea prepared for heavy weather, there was nothing to disturb the chance for some serious writing.

First the cabin had to become an office, bearing in mind I had now slept, eaten and generally lived in it for three days and nights and it was looking like it. I briefly envied the owner who was the sole occupant of the large black yacht across the fairway. He had more leg-room.

Back in the spring, I thought it might be useful to have a workbench aboard Blue Mistress – a plank of wood that I could hammer/saw/screw against without damaging the boat. The result was more ‘finished’ than I had planned. It stows easily, and has had several uses – but not yet the planned one!

A small addition turns it into an office chair – the right height to sit comfortably at the table and reach the keyboard easily . . . a balanced position in the boat.

I spent seven hours in this seat that Wednesday working on a novel, building characters, deciding on the research needed  . . .  with no interruptions! (How simple that sounds, how complex the reality).

Some writers have sheds at the bottom of their gardens . . .