There are a number of reasons why I might not have shown this image – personal embarrassment being high on the list, But then I thought, “Hey, this is what happens if you don’t lift the boat often enough. Not many people have seen this on their vessels, so maybe it will make them feel even better about the refitting work they do.”

I haven’t posted this year. One of the results of a difficult year has been a lack of time afloat. So when, on one of the few times I was able to go to sea, I had engine trouble, I finally decided it was time to lift her and spend some productive refit time over the winter.

And yesterday we did lift the boat, and this is what we saw in the early evening gloom (click on image to enlarge) . . .

. . . not just barnacles but a whole colony of mussels – on the rudder and around the propeller. So this was why the helm was sluggish and the engine was difficult to start.

There were some ripe comments from the lifting crew!

However, Blue Mistress had always cleaned up well and today . . . 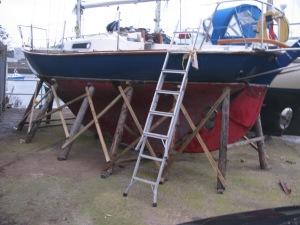 She won’t be back in the water until early May. There are a number of jobs I want to do on her, including major work on the engine. And we also have other adventures planned before then.

One thought on “Lifting Blue Mistress”