END_OF_DOCUMENT_TOKEN_TO_BE_REPLACED

I have never crossed Bideford Bar but it seems that I have known it all my life. I thought I would check it out. Who knows? I may yet get the chance.

Many sailors have crossed this Bar, and many still do. To them I say, please bear with me. I am doing what I should do – looking at the water, reading the entries in the pilot book, looking at the chart. Also, I am looking at it from two different viewpoints – what it’s like now and what it might have been like in the nineteenth century. I have always had  problems envisaging what it would have been like to live in a castle that now stands in ruins, but envisaging being at sea in a wooden sailing ship is different altogether – the sea is the same sea, the wind the same wind.

That there was a gale blowing and rain was in the air last week just made it more interesting. The outside bar was hidden in the murk . . .

END_OF_DOCUMENT_TOKEN_TO_BE_REPLACED

On Friday we were in Cobh (pronounce Cove) – the port of Cork, looking at “the statue of Annie Moore and her two brothers. Annie Moore became the first ever emigrant to be processed in Ellis Island in the United States when it officially opened on 1st January 1892.

END_OF_DOCUMENT_TOKEN_TO_BE_REPLACED

On Friday, we cycled, mostly into the wind and intermittent light rain, from Barnstaple to Okehampton – 40 miles through the rolling hills of North Devon.

END_OF_DOCUMENT_TOKEN_TO_BE_REPLACED

It started to rain, the tide was high.

I leaned against the rail at Queen Anne Battery and watched a regular occurrence. Today, it was Hav Snapper turning into the Cattewater from the Sound.

END_OF_DOCUMENT_TOKEN_TO_BE_REPLACED

We cycled along the bank of the Rive Exe in the afternoon – a gentle preliminary for a longer ride planned for next month. The tide was low revealing the wide mud flats and the winding channel.. We stopped at the Turf for a coffee before going on towards Exeter.

END_OF_DOCUMENT_TOKEN_TO_BE_REPLACED

The New Zealand Herald has a report from one of their reporters in Vanuatu this morning – here. The video clip shows the destruction in Port Vila. Sadly, there has been loss of life. I understand wind speeds were in the 300km/h mark.

Yesterday, Webb Chiles carried a photograph of the damage in the harbour and a first hand description of the harbour itself – here

END_OF_DOCUMENT_TOKEN_TO_BE_REPLACED

Sunday: the sun shining, the air warm, just a little wind. A day for airing the boat, clearing out and re-stowing the fore-cabin. I added eye-bolts for extra anchorage. The oars are strapped off the cabin sole; the bin for the anchor rode will now stay put.

The engine turned over and started after a shaky few minutes. Actually, it didn’t start first time. I left it. When I tried again, it started – (why not the first time?). It needed a run and I wanted an excuse to motor down river to the Sound.

There was hardly a boat to be seen – a classic yacht in the distance, too far away to photograph. 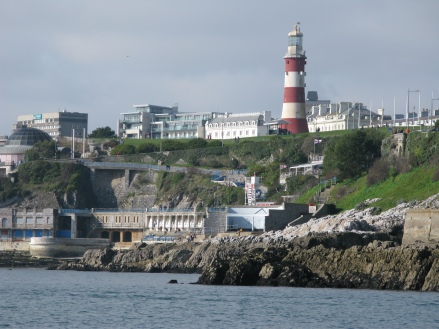 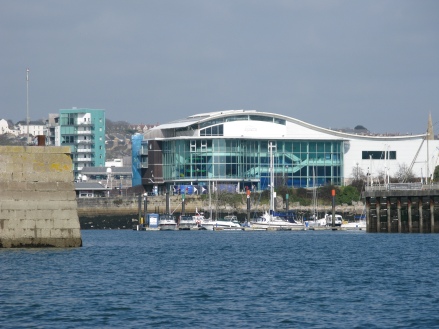 The yachts were stacked away. 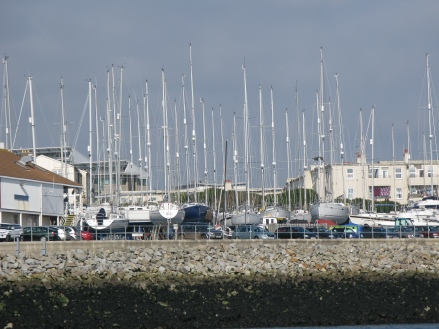 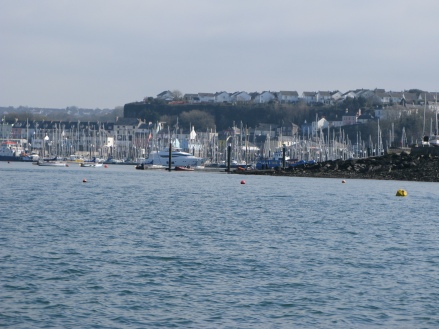 The identically liveried Bro Gemini and Luhnau – the one empty, the other loaded, lay quietly against the wharf. 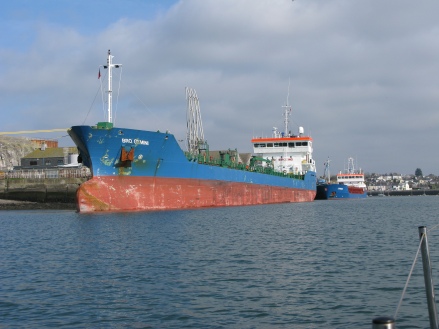 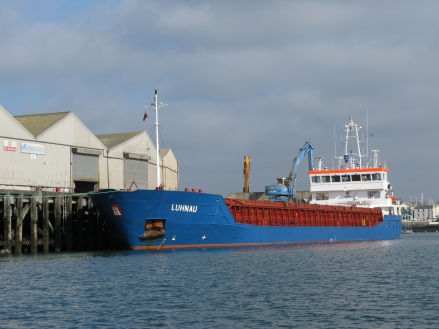 Not a lot happening – but great to be alive and on the water. 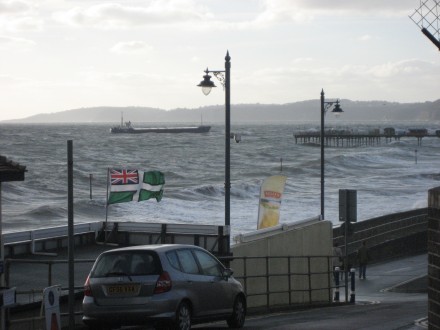 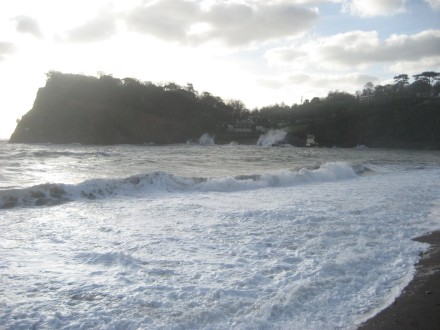 . . . ending in a tricky turn and stern-first into her berth. 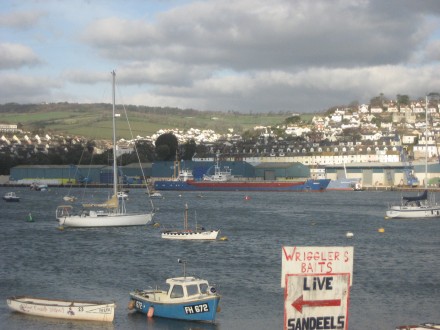 Can this be good for a car? 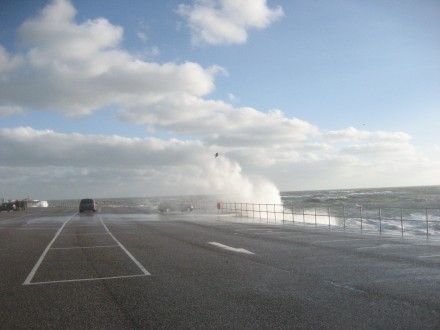 Exmouth and the entrance to the Exe Estuary in the distance 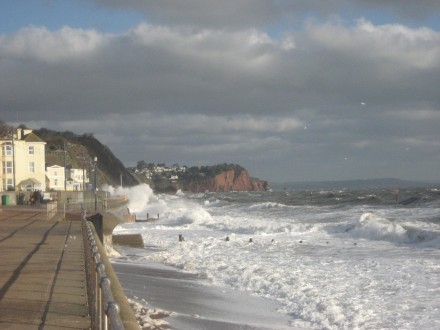 No takers for morning coffee 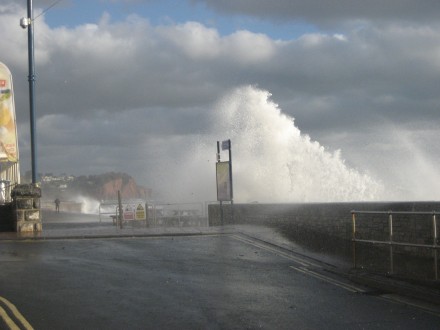 No wind yesterday but a fine day to run the engine.

I removed the sail cover and attached the halyard but left the lazy jacks in place as I didn’t expect to set the sail. As the Sound opened up it, it was almost empty – two vessels in sight, one trying to set a sail. A little later he had given up. 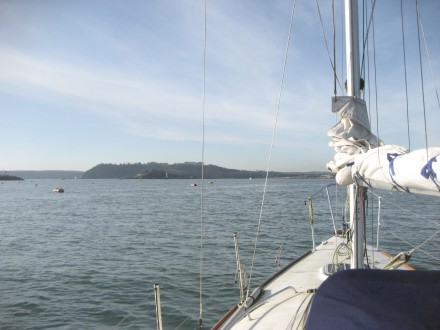 It was also a perfect day to anchor and run out the rode. I dropped anchor around 1300 close to Jennycliff near the Withyhedge beacon. 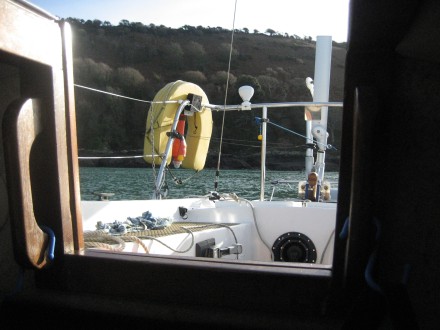 Then time for lunch, and, as I had bought the dinghy with me, time for some photography. 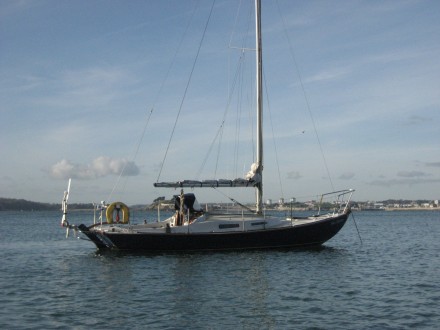 There were three naval vessels at anchor. The village of Cawsand can be seen in the sunshine on the far side of Plymouth Sound – (just aft of the pulpit). 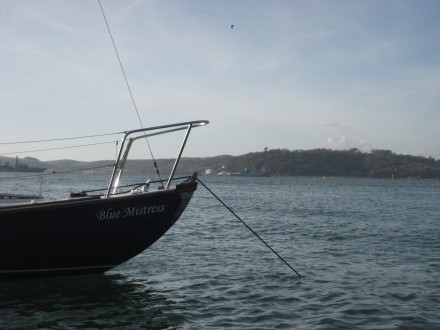 All the metal work makes Blue Mistress look positively industrial. The depth is 7.7 metres – it had dropped from 8.4 metres in the 3/4 hour I had been at anchor. 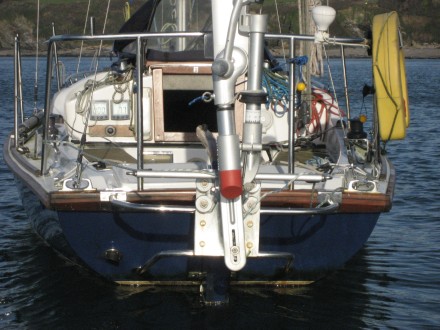 The washed-out colours of January. 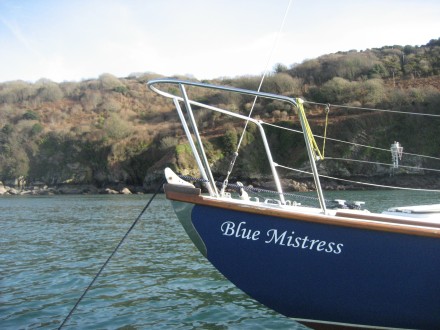 This simple rig holds the course giving plenty of time to go fetch something from below. It works just as well under sail.. 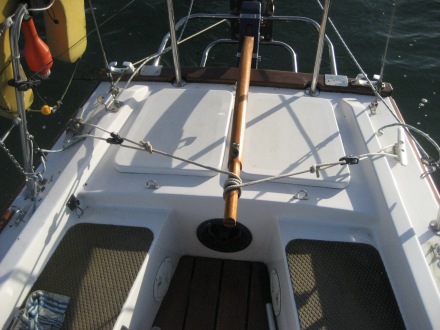 The tide was low and the water slack as I passed the Cattewater Wharves. 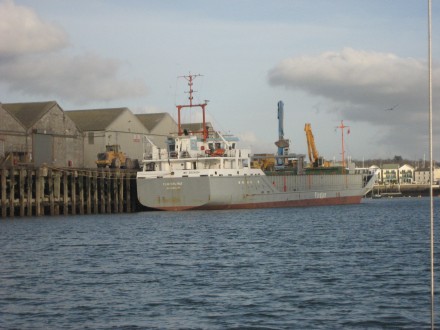 Flinterlinge, registered out of Groningen, was busy unloading. 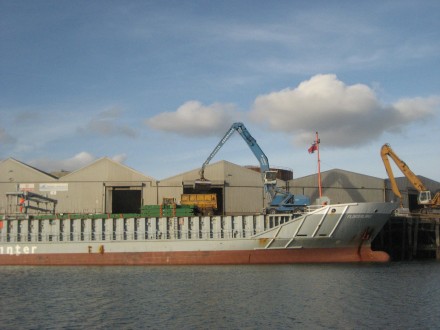