Once through the bridge, I enjoy the scene that’s opening up,

The channel is wide here but I’m obviously out of it already.

The tide seems to be taking me down towards the entrance to the River Tavy.

The buoy I had failed to see turns out be a lot further towards the other bank than I expect.

I need to zoom in on the gps. At the level I had it – a  wider view, it didn’t show the loss of track in enough detail. It would have been fine out at sea, but not here where the margin for error is a lot less.

That’s one of the reasons I am doing this.

I look at the chart and sigh. I need to pay more attention.

The buoy at last. The entrance to the Tavy behind.

Because I have neither the boat nor the money to navigate like this . . .

I have a Garmin GPSmap76CSx handheld device which I fasten to the front of the cockpit. The screen is 4cms x 6cms. I can read the numbers from where I sit at the tiller. The local waypoints have been entered from the chart via my pc using the Garmin Mapsource software. The same software gives me a printout of the current route including the distance to the next waypoint and the course. So, not only do I have the gps screen in front of me, I have the printout by the companionway as an alternative navigation aid – belt and braces for the singlehanded.

I have also laboriously entered waypoints from a book of waypoints of the western half of the English Channel – westward from a line between Portland and Cherbourg. This allows me to study routes, distances, courses etc in a general way. However they are somebody else’s waypoints – it relies on them entering the figures accurately and assumes each of their waypoints is where I want to be. I expect them to be correct, but, ultimately, it’s my responsibility. Therefore, I need the charts as well. Mistakes are easy to make as we will see later.

I imagine that with more sophisticated hardware and newer software multiple waypoints can be downloaded directly from the internet. But for me the same reservations will still apply.

However, Webb Chiles used a mini iPad to navigate across the Pacific. I don’t have his confidence – I wonder if I ever will. (I have a first generation iPad. You won’t believe the things it can’t do. Although maybe I will have to upgrade. In looking for a link to my Garmin I note that it has been discontinued.)

I round Weir Point and open up the next stretch of river to Cargreen. I am genuinely surprised at the number of yachts moored here. It seems a long way to the sea. 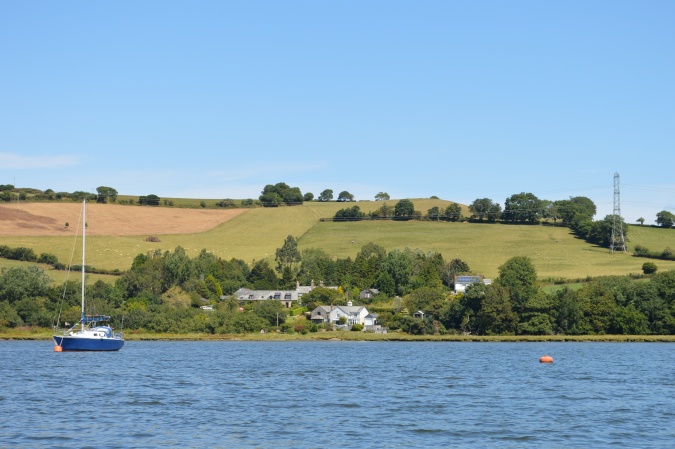 There are houses visible from the water that are never seen otherwise. 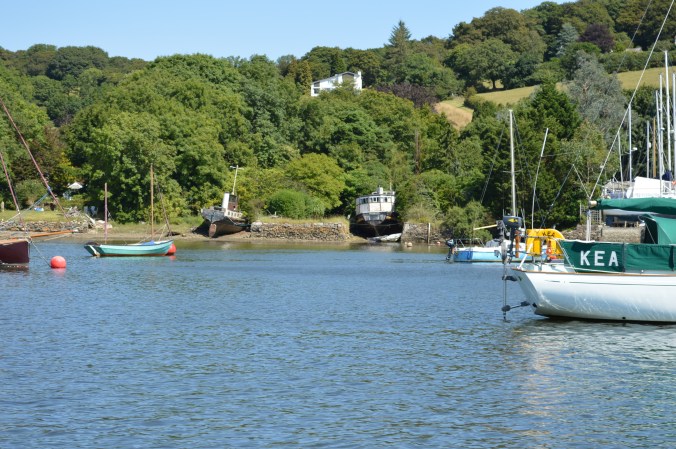 Along the banks are signs of an industrial past . . .

. . .  the quay at the curiously named Hole’s Hole still good for coffee in the sunshine – (almost as good as being on the boat); the hulk I believe to be Merganser.

The banks start to close in. From here the channel begins a long turn west then south and narrows  . . .

(All images taken by Bill Whateley)