During a passage west, I have been thinking about the  difficulty of taking photographs of the sea that reflect the actual sea state, particularly the more exhilarating sea states. In the previous post, I hinted that adding context to the image gave it considerably more depth.

From Fowey, I set out for Falmouth, again a distance of approximately 20 nautical miles. The wind had died only a little from yesterday and I kept the single reefed main and working foresail. Instead of a following swell, the stretch from the entrance to Fowey to Dodman Point was at right-angles to it, the wind on our port (left) side. The weather forecast described the sea state as moderate, which is less than rough but definitely not calm. Blue Mistress is comfortable in this situation, the long keel giving her a steady motion. She flicked the occasional spray over the bow, but the cockpit remained dry. The sun shone. The tide would be favourable until around 1300. I would need to concentrate because of the wind but it would be a good day.

There was time for the occasional photograph and I have used five of them here plus one from the previous evening.

In marine photography, the sea, unlike the countryside, doesn’t have fixed landmarks (or seamarks) to give added context. An image of sea alone gives the viewer no fixed point to relate to.

Thus in this image there are several fixed points – the Cannis buoy (in focus), the Cannis Rock beyond and Gribben Head with its prominent sea mark. It had added significance for me because the Cannis Buoy was the object of my first ever single-handed ‘voyage’, aged 14, in a Fowey River Class dinghy like the ones I had watched racing in Fowey the previous evening: 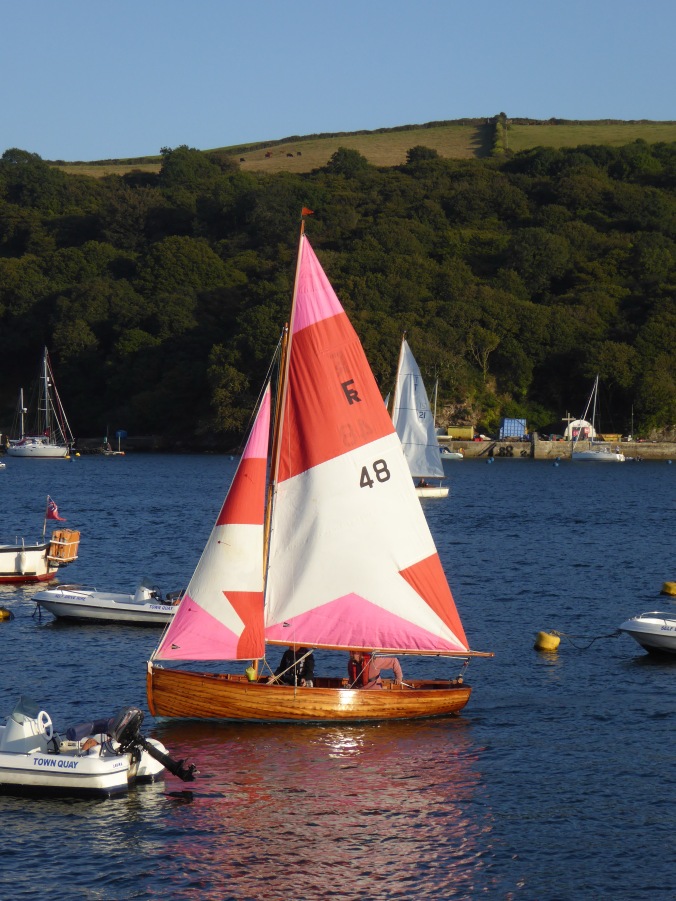 Although there are fixed points in the first image, it still does not reflect the state of the swell as I remember it. I think the distances are too great. The second image is better in that sense because the object is closer. The wind is reflected in the sails and the evident movement of the boat through the water. The surface in the harbour is relatively smooth.

So, if we are going to include a solid object, we could bring it closer:

We are now off Mevagissey. I saw this yacht and one ahead of it leaving Fowey as I was approaching the Cannis buoy. My boat has a waterline length of 19 feet. This is short compared to the bigger boats. They will inevitably go faster.  At moments like this, I find I have a competitive instinct that at other times I pretend not to have. I tell myself not to be ridiculous but my friendly wave is tinged with envy – not for the yacht but for the performance. That said, this image does begin to reflect the moderate sea and I am pleased with it.

Using the boat as the fixed object is the classic approach:

A short while later, we reach the Dodman and ease away toward Falmouth. I follow the two yachts for the rest of the morning at an ever-increasing distance until, beyond Zone Point, they turn into Falmouth.

The swell is now on our port quarter, wanting to push the stern round – a twisting motion. The waves are steeper here and the wind is tending to come in stronger gusts, pushing us along at a good pace. The estimated arrival time on the gps is 1310 – it will have been a good morning’s sail.

There is white water visible – the tops of some waves are breaking. I am looking at the sails, concentrating. Every now and then there is a rush behind as a broken wave bears down on us, only to be absorbed into the general swell, Blue Mistress rising above it as it sweeps beneath us. I included a photograph of one such wave in the last post. The sun is now reflecting off the waves, accentuating them, and I wonder if I can take an image without fixed points. I don’t want broken water in the picture because it reflects excitement – that’s not what I am trying to achieve. This is the sea off Cornwall on a relatively windy day, not the Southern Ocean in a storm. Thus:

This last photograph is very close to what I have been looking for – a hint of the power of the sea. Highlighted by the sun, a solid wave is building, hiding the horizon. It may or may not break. In a few seconds it will nonchalantly lift the boat as if it were a tiny wedge of flotsam. It will pass on towards the coast, only to be replaced by the next wave. . . . and so it goes.

One thought on “A Passage into Cornwall”