I have had a small ‘come-in’ fitted on Blue Mistress. 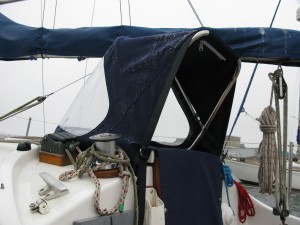 This is not the large, curved, ‘extra-room’ spray-hood seen on most modern cruising yachts but a small, upright pram hood over the companionway. I believe this design is called a racing spray-hood, but I prefer ‘come-in’ – (a description I came across in a book written in the 1950’s),  for the comfort of the name.

I can now sit in my favourite spot out of the weather – on the companion way sill with my feet on the engine housing and a good view forward.

The frame is well-constructed and robust (Dicky B Marine). It is designed to fold flat onto the deck with an angle to clear the wooden bar at the front end of the hatch. In the upright position, it is secured firmly onto the bulkhead either side of the companionway with straps.

The canvas zips onto the frame and is attached to the aforementioned bar with studs – it can be shipped in a trice. The original design had the attachment further forward to give it an elegant slope and also create some room to stow a camera etc. This would have involved fitting a new batten across the hatch housing. However, bolts through the deck here would have stopped the hatch sliding forward. In the event,  it has been kept as small as possible.

The opening is just too small for me to enter and leave without having to push the trailing edge forward about six inches. Initially that meant lowering it completely every time I went below. The problem has been solved with two short lengths of shock cord stretched from the angle at the bottom of the frame to the point where the retaining straps are fastened. These straps are very secure but it is fiddly to keep releasing and tightening them. The shock cord does the job perfectly.

I particularly like this design because it leaves the winches and lines clear. I can go forward easily without tripping over it.

Also, the window is big enough not to block the view forward from the tiller.

. . . and get used to the interruption to the lines of the boat! 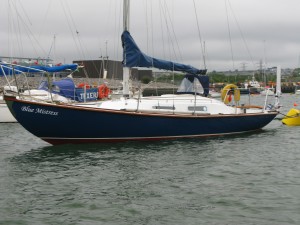