This series of posts has covered a short voyage. My original intention was to outline – (mostly in images), a trip I made up the rivers Tamar and Lynher in August and maybe make a few comments about waypoints. Experiencing the advantages and disadvantages of waypoints was the exercise I set myself for the trip. On the way, I learnt much more than expected. All voyages involve a personal journey of one sort or another, but, looking back at this one, there were so many things I hadn’t seen or done before. Like many  people who finish their day job, I ask myself, “What on earth have I been doing all my life?”

I go on deck around 0500 to check the rode. I shortened it last evening to keep Blue Mistress out of the shallows as the tide fell.

It is dark. I have rigged an anchor light aft rather than on the normal fore-stay because it throws a useful light over the cockpit. The boat is only 25 foot long so the difference is unlikely to affect any passing boat. Of the two other anchor lights I can see, one is rigged the same way.

The deck is cold underfoot but the night air is comfortable. At the bow, even though there is a light not far behind me, the darkness is intense. The tide is at its peak. For a few minutes, the immense weight of water that moves up and down this river is still. The boat has turned towards the centre of the pool and is stationary. The rode is slack. There is not a ripple in the water, which is black and impenetrable. It is impossible to tell how far below me the surface lies.

Most noticeable is the stillness in the air – not the stillness of a small dark room but the deep stillness beneath the open sky. There’s not a sound, not a movement, everything is calm.

I lean against the pulpit and take it in, not thinking, just being there . . .

. . . until the invisible moon moves on, the rode tightens, the boat swings to face upstream. And the moment is over.

Refreshed by the unexpected discovery, uplifted even, I go below.

A while later, the sky starts to lighten from the east and, cup of coffee in hand, I watch the sun rise over Dartmoor. 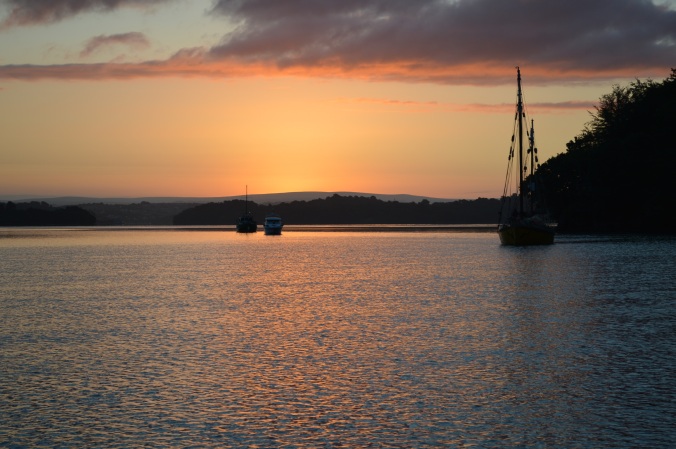 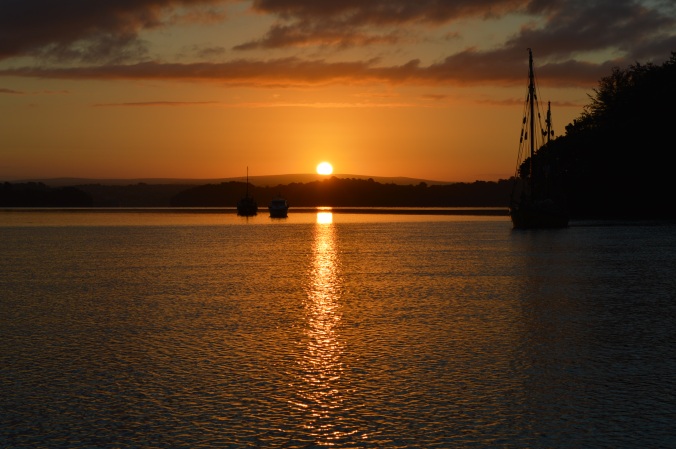 The tide is falling, I have promised to be home this afternoon – time to lift the anchor and leave. 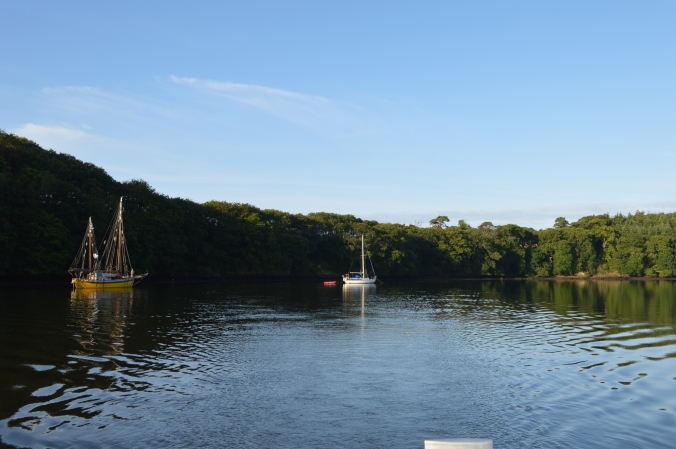 The early morning light is intense . . .

. . . the reflections on the water stunning.

Blue Mistress leaves a long, straight wake back to the Wacker Lake buoy

At Ince Point, the channel narrows. The tide is beginning to stream . . .

. . . and the mud-banks are gradually appearing, leaving this Drascombe Lugger aground.

We come back into the Tamar and turn downstream, past the naval dockyards – the cranes, the wharves, the warships and submarines, a totally different mood.

The strong tide takes us and we have to slow to thread carefully round the stern of one of the Torpoint ferries . . .

. . . on past the Mount Edgcumbe estate , back into Plymouth Sound, across to Mount Batten and up the river Plym to the mooring.

(All images by Bill Whateley)

One thought on “Stillness in the dark”