The early morning mist reveals four egrets. We enjoy the peace together.

The tide is falling and I decide to wait till after lunch before leaving. There will still be an hour or so to the next high tide but it will be slackening. This gives me a morning to do odd jobs on the boat and time to sit and read.

Looking at the chart and with hindsight I could have nosed my way down earlier than I did. However, time and elbow grease makes Blue Mistress look considerably smarter going downstream than she did upstream.

There is traffic on this part of the river even at low tide and I get to see another seine boat close to. The Calstock ferry still runs, and now the tide starts to rise, the tourist boat comes back.

I drop the mooring around 1300 about an hour before high water. As I pass the quay, I receive a friendly wave from an elderly couple sitting on a bench eating ice creams.

This time, there is no need for waypoints, I learnt the landmarks on the way up and am relaxed about the channel.. There is time to take photographs . . .

. . . this seine boat has been ‘modernised’; she has a fine bow, rowlocks rather than thole pins for the oars . . .

. . . but, a mile further on, a second. When I was looking for a boat in 2006, I seriously thought about a Contessa 26 but the Folksong came along first, with the same specification – small enough to easily sail single-handed, long keel, good sea boat.

Incidentally, I have recently watched Nick Jaffe’s film “Between Home” which I highly recommend. Despite never having sailed before, Nick bought a Contessa 26 and sailed from Europe to Australia, including shipping it overland from New York to California. It puts my little trip up the Tamar where it belongs. 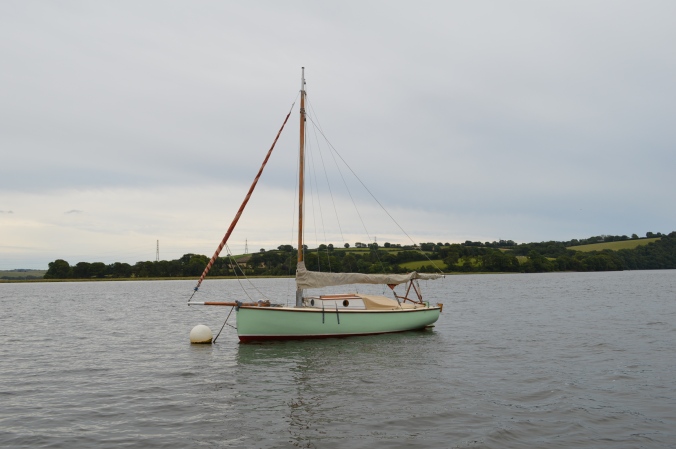 I also recommend Bill Serjeant’s blog (Bill’s Log) for his current series of in-depth looks at small yachts. I have found it fascinating. If he sees this, I hope he likes this one.

At Cargreen, the river widens and the channel is lined with moorings. This yacht sails gently past on the top of the tide, a couple enjoying the afternoon . . .

. . . and another just before the bridges at Saltash.

Pass beneath the Tamar bridge and then Brunel’s bridge. I turn west into the Lynher and into Cornwall.

The tide has peaked and is now heading me – although with little strength at this stage..

Above Antony Passage, the river widens, leaving a broad stretch of water with a narrow channel through it. Once again, I don’t know it well enough to stray too.

I look for the aptly-named Wacker Lake buoy towards the far end of the ‘lake’, and round it towards the anchorage at Dandy Hole.

The chart gives just over 5 metres in the middle of Dandy Hole but it shallows quickly. I tuck into a spot on the edge of the deeper water and drop anchor.

As the tide falls, I notice the stern is a little too close to the bank. I shorten the rode and remind myself to check it at the next high water..

The evening light is spectacular, with a clear view down river to Devonport and Dartmoor beyond.

The forecast is for a windless night . . .

(All images taken by Bill Whateley)

2 thoughts on “To the Lynher”