In the Preface of the book I have just started to read*:

“Figures that clothe facts are in fashion and, though the statistician’s route to the truth may be more wearisome than the poet’s, there is much to be said for it. (However), one of its faults is the impression of precision it conveys where none is possible. Figures so often depend on opinion, assumption, interpretation, attitude, method, purpose.”

“It is not easy to write for the layman without offending the expert, or for the expert without boring the layman. Imprudently, I have fallen into the trap of trying to address both. This has led me on the one hand into more detail than might be digestible, and on the other to rounding off to the nearest ton, foot or percentage.”

It makes no difference that this was written in 1986. It is probably even more relevant today – (the second statement certainly resonates with this writer). There is one more point I would like to add: the conviction that we have achieved the definitive scientific solution to a particular problem encourages us to relax – to be distracted from looking wider and deeper and seeking further directions.

As an illustration to the above, instead of figures, I offer you images and ask what you see? 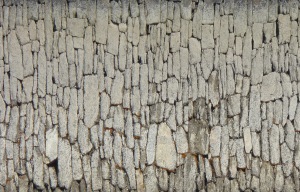 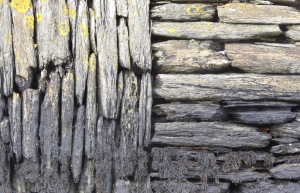 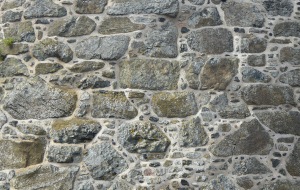 Do you see n square areas of walls constructed of particular types of stone, arranged in specific (named) layers, reflecting the age they were built and the function they were designed for? Do you think about the height of wall that the particular method of construction would allow? Do you see the materials used as a clue to the local stone available and therefore to the whereabouts of the wall?

In other words, do you prefer the science, the technology, the engineering, the mathematics involved in building these walls, or do you look at them in an entirely different way – a more poetic view? Do you see the stories that flow from them?

For example, do you see two of the walls as spending much of the day underwater – the tide coming in, fish swimming along them, small crabs climbing in and out of the crevices, large wooden sailing vessels moored alongside, or smaller fishing boats tied stern-to?

Or the wall of a boatshed holding fishing gear – nets, buoys, pots, the wall part of the daily lives of generations of fishermen?

What about stretching yourself, a wall feeling dry heat, smelling sage and thyme, in the past seeing partisans pursued by armed, uniformed soldiers?

Or one with a once-valuable, industrial purpose but now repaired and rendered for the tourist – passed and largely ignored by young lovers, old lovers, ice-cream-eating, flip-flop-wearing holiday-makers and hat-wearing, stick-carrying, back-packed walkers?

Both art and science colour these images. There is a balance between the two that we need to retain. The general tendency to embrace figures – distracted by their presumed precision, while ignoring the wider stories with their valuable insights, diminishes us.

(Images and casual cropping – with apologies to all engineers, by Bill Whateley)